The images in this article of the carcasses of several protected cuscus apparently for sale at a market place in the eastern town of Los Palos in East Timor were published on the blogspot Timor Agricola on 14 February 2009.

Under Indonesian law, the species Phalangeridae (Cuscus) and all species of the genus are protected against capture, possession and trade by Surat Keputusan Menteri Pertanian No 247/Kpts/Um/4/1979 (Decision of the Minister for Agriculture). 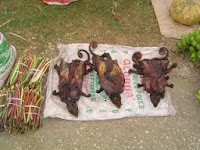 In addition to the applicable Indonesian law, one of the earliest legislative interventions by the United Nations Transitional Administration in East Timor was Regulation of 30 June 2000 No 19 of 2000 on Protected Places. It includes the following provisions:

(a) Sea tortoises;
(b) Sea turtles;
(c) Marine mammals, including bottlenose dolphins, whales and dugongs;
(d) Wallabies;
(e) Crocodiles;
(f) All animal and plant species listed in Appendix I or Appendix II of the Convention on the International Trade in Endangered Species*; and
(g) Any other plant or animal species designated as endangered by the Transitional Administrator.

3.3 A person or legal entity wishing to conduct scientific research by taking samples from an endangered species or its habitat shall apply to the Transitional Administrator for an exemption from the operation of section 3.2.

3.4 The form of an application for an exemption shall be prescribed by directive.

3.5 The granting of an exemption may be subject to conditions. No exemption shall be granted in respect of research that imperils the survival of an endangered species in East Timor.

Marsupials such as the cuscus are protected wherever they exist for good reason - because of their unique genetics and their rarity. The capture, killing and trade in the protected cuscus in East Timor is a matter that the government, committed to environmental protection in East Timor, should be formulating a policy about and instructing the law enforcement agencies to implement the law to end the trade in this and other endangered species in East Timor.

* Cuscuses are listed in the Appendices to the Convention
-----

This is an edited machine generated translation of the Portuguese text of the post on Timor Agricola:

The meda is a marsupial that lives in the trees of the forests of Timor. It can also be found on neighboring islands of Indonesia from Timor, the Moluccas to New Guinea. It was apparently introduced in Timor by humans 6,500 years ago, from New Guinea. The meda animal belongs to the same order of the koala, the diprotodontia.

The scientific name of the meda is an allusion to the fact that two phalanges in each foot together by a fold of skin that the animal uses to groom.

We can find this animal in the primary forests of Lore or Jaco, in secondary forests throughout the island and even in gardens and orchards.

In Muslim areas of Indonesia, religion prohibits the hunting of meda. In other regions, it is an important part of diet of the people since prehistoric times, providing animal protein to a diet that is usually lacking in these nutrients.

The meda are domesticated quite easily. In Dili, they are frequently seen on the streets carried on a long stick that a man hangs from his shoulder, and where the meda is desperately clinging.

These animals can weigh up to 4.5 kg, but usually it weighs around 2 kg. It has a long tail from 28 to 42 cm, which it uses to clingi to the trees and is devoid of hair on end. The tails of males are completely white. The fur is thick and similar to wool. In adult males the color varies from white and dark gray. The females have brown hair brown or gray and both sexes have a black stripe on the dorsal neck and tail. The young are maroon. The marsupial pouch of the female has four nipples. The feet are particularly characteristic, because the fingers are opposable as in humans. 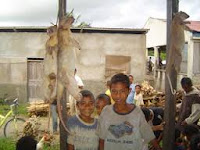 The following is an extract from Fataluku medicinal ethnobotany and the East Timorese military resistance :

The small intestines of the cuscus (Phalanger sp.), a small nocturnal marsupial, were also used to treat malaria. While collecting medicinal plants, the two FALANTIL guides constantly scanned dead standing trees for signs of the cuscus' nest. When a nest was spotted, one of the men climbed the large dead standing trees unaided and removed the cuscus by the tail. The primary reason for hunting the cuscus was for the meat, however, the small intestines can be boiled or roasted and eaten to treat malaria. It was believed that the small intestine has curative properties because the cuscus feeds heavily on Derris sp. and Tinospora smilacina. T. smilacina is used traditionally in Australia to treat infections and inflammatory conditions and was found to have significant anti-inflammatory activity by Li et al. Furthermore, Derris spp. are traditionally used as fish poisons throughout South East Asia and have highly active compounds known as rotenones. 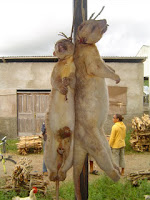 Tara Bandu: The Adat Concept of the Environment in East Timor
Posted by Editor at 06:37

1. The Rule of Law: Theoretical, Cultural and Legal Challenges for Timor-Leste

1. Community land in East Timor – A New Tragedy of the Commons?

3. Lawyers condemn pardoning of criminals in East Timor as an erosion of democracy and the rule of law

1. The Regulation of Martial Arts in East Timor: An Overview of Law No 10 of 2008 on the practice of martial arts

2. Timor-Leste - The Curious Case of the Fake Policemen

3. Violation of the Rule of Law and Criminal Justice in East Timor

4. Defamation in East Timor: A Criminal Offence or Not: A Legal Analysis

5. Criminal Defamation in East Timor - A Miscarriage of Justice

6. Witchcraft and Murder in East Timor

7. The Case to Intervene and Stop East Timorese Killing ‘Witches’

9. East Timor: Language and The Law

10. Land Policy in East Timor: The Cart Before the Horse

15. What happens when abortion is illegal - The case of East Timor

16. HIV-AIDS and Homophobia in East Timor

1. Justice for Serious Crimes Committed during 1999 in Timor-Leste: Where to From Here?

3. Criminal Justice in East Timor and the Constitution of East Timor

4. Commentary on the Draft Arms Law in Timor-Leste

1. The Law on Political Parties (No 3/2004) & the Decision of the Timor-Leste Court of Appeal in the case of Vitor da Costa & Ors v Fretilin

4. Legal opinion on the appointment of the Prime Minister and the formation of Government in Timor-Leste

5. A legal opinion on the Formation of an Unconstitutional Government in Timor-Leste

2. Extradition from Indonesia to East Timor & the Serious Crimes Process in East Timor 1999 - 2005

4. East Timor: The Constitutional Process Governing the Dismissal of the Government

6. Roles of the President and the Prime Minister in the Current Constitutional Crisis in East Timor

3. On the occasion of the International Conference on Traditional Dispute Resolution & Traditional Justice in Timor-Leste

4. General Facts on the Timor Sea & Facts on the Negotiations on a Permanent Maritime Boundary between Timor-Leste & Australia

3. Some Observations on UNTAET Regulation No 27/2000 on the Temporary Prohibition on Transactions in Land by Indonesian Citizens

5. Some Observations on the Report on Research Findings & Policy Recommendations for a Legal Framework for Land Dispute Mediation in East Timor

6. An Overview of East Timor's Law No 1 of 2003 on the Juridical Regime on Immovable Properties

7. Report on Research into Adat Land Law in East Timor

8. Short Analysis of UNTAET Executive Order No 2 of 2002 on the Decriminalisation of Defamation

9. An Overview of the Constitutional Drafting Process in East Timor

10. Some Notes on East Timor Government Decree No 1/2004 on the Orthographical Standard of the Tetum Language

12. Tara Bandu: The Adat Concept of the Environment in East Timor